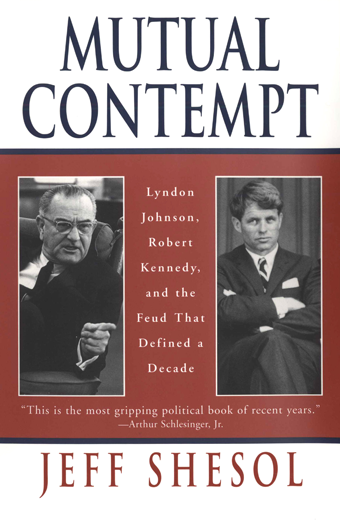 Lyndon Johnson and Robert Kennedy loathed each other.
They were a study in contrast — destined, it seemed, to disagree. They ranted, obsessed, sulked and brooded about one another, making few big decisions without first considering the feud.

It was the most important rivalry of their times. It spawned political turf battles across the United States. It weakened the Democratic Party by forcing its members to choose between them. It captivated the newly powerful media, that portrayed every disagreement between LBJ and RFK as part of a prolonged battle for the presidency or a claim on the legacy of the fallen JFK. It helped propel one man to the Senate and drive the other from the White House.

It is impossible to fully understand either man — or the decade they dominated — without understanding their troubled relationship with one another. Mutual Contempt explores the personalities, politics, and issues that wrenched these men apart, as well as the impact of their feud on civil rights, the war on poverty, and the war in Vietnam. Like a Greek tragedy played out on a nation’s center stage, this book provides a prism through which to view two men, their times, and the nature of power.

“Riveting .... Writing in sharp, fluent prose, Mr. Shesol does an authoritative job of giving us a vivid, almost novelistic sense of both of his protagonists, while at the same time situating their political stands within a historical context .... His narrative is rigorously fair-minded: he shows us both men’s flaws, pettiness and irrationality, but he also shows us their mutual insecurities, compassion and belief in civil rights .... At once a fascinating study in character and an illuminating meditation on the role character can play in shaping history.”
The New York Times
“A superb political drama worthy of the stage .... A sterling book — lucid, fair, intelligent — written with style and pace.”
(London) Sunday Telegraph
“The judgments are acute ... the writing smooth, and the end product gripping.”
The Economist
“[No biographer] has covered the matter as comprehensively or as well as Shesol does here .... A talented writer, Shesol demonstrates the rare gift for clarity without sacrificing complexity.”
Washington Monthly
Buy the Books

John Glenn, John Kennedy, and the New Battleground of the Cold War

Franklin Roosevelt vs. the Supreme Court

Lyndon Johnson, Robert Kennedy, and the Feud that Defined a Decade

“
The most gripping political book of recent years.”
Arthur M. Schlesinger, Jr.
“Nothing less than the best rendition of the post-JFK 1960s politics we have had.”
(London) Sunday Times
“An exhaustive and fascinating history of this nasty quarrel .... Shesol’s grasp of the era’s history is sure, his tale often entertaining, and his research awesome.”
Russell Baker, New York Review of Books
“A penetrating and richly detailed account .... Shesol is a gifted writer. His book, thoroughly researched, based on dozens of manuscript collections and interviews, adds fresh insight to a familiar story.”
David Oshinsky, New York Times Book Review