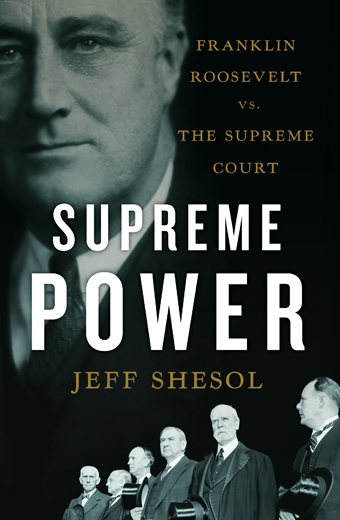 When the Court’s conservative majority knocked down the pillars of the New Deal, one after another, democracy itself stood on trial. If Roosevelt was going to have any hope of changing America, he would have to find a way to overcome the Court. In 1937, he struck back with an audacious plan to pack the Court with liberals. The ensuing fight was a partisan firestorm. The battle dealt Roosevelt the biggest setback of his political life and forever split the Democratic party. But it also brought the Court and Constitution into the twentieth century.

“Superb .... Shesol is a terrific storyteller, and he brings the book’s events to life by taking the reader inside the key places where the constitutional conflict took shape — the courtroom where the major decisions were announced, the smoky meetings where Roosevelt and his advisers hatched the court-packing plan, the halls of Congress where FDR’s supporters and opponents battled for legislative supremacy."
Boston Globe
Read the full review
“Riveting."
Washingtonian
Read the full review
“Truly entertaining ... superb .... The parallels between Obama today and FDR ... are in the zillions."
The Daily Beast
Read the full review
“
Supreme Power is an extraordinary book that rings with relevance for our time. One of the most eloquent historians of his generation, Jeff Shesol has a deep understanding of the presidency, and the interplay of politics, personalities, and principles, all of which he brings to life in this rich, remarkable book. Full of surprises and new insights — each rendered in clear and confident prose — this book is about more than FDR’s plan to pack the Court. It’s about America’s enduring struggle to reconcile our founders’ ideals with conflicting challenges in our constant pursuit to build a more perfect union.”
Bill Clinton
“I have a simple request: Anyone who has anything to do with the Kagan confirmation, and anyone who cares about the Supreme Court and the Constitution, ought to read Shesol’s new book."
Politics Daily
Read the full review
“Shesol ... breathes new life into an old fight with intelligence and excitement ... one of the most interesting books about the Supreme Court in years."
NPR
Read the full review
“
Written with a novelist’s eye, a historian’s care, and a blogger’s energy, Jeff Shesol’s Supreme Power is a fascinating reconstruction of one of the great political and legal battles of the twentieth century. The story of FDR‘s court-packing plan is a citizen’s education in the twenty-first.”
Jeffrey Toobin
“His exhaustive research and deft writing produced a book that is an easy and enjoyable read …. An account that will delight political junkies of any persuasion. And Hollywood could not devise a more dramatic ending.”
The Washington Times
Read the full review
"Book of the Month"
History News Network
“Hugely impressive … told with the style and panache of a born storyteller…. A magisterial work that will be read and appreciated for decades — as well as provide Obama with food for thought as he faces up to his own judicial battles.”
The Sunday Business Post
“Impressive .... Supreme Power is history come alive."
The Dallas Morning News
Read the full review
“A richly detailed, beautifully written and, well, judicious account.”
The Pittsburgh Post-Gazette
Read the full review
"Book of the Week"
The Week
Buy the Books

John Glenn, John Kennedy, and the New Battleground of the Cold War

Franklin Roosevelt vs. the Supreme Court

Lyndon Johnson, Robert Kennedy, and the Feud that Defined a Decade

“
Once in a generation a groundbreaking book comes along to provide a major reinterpretation of a familiar historical event. Shesol tells the story of FDR’s court packing plan as it has never been told before. This is a stunning work of history.”
Doris Kearns Goodwin
“Superb .... Remarkably assured and eminently readable ... a fluid, entertaining yet tremendously perceptive book.”
The Nation
Read the full review
“Engrossing.”
The New Yorker
Read the full review
“Riveting .... Revealing .... Supreme Power is an impressive and engaging book — an excellent work of narrative history. It is deeply researched and beautifully written. Even readers who already know the outcome will find it hard not to feel the suspense that surrounded the battle, so successfully does Shesol recreate the atmosphere of this great controversy."
Alan Brinkley, The New York Times
Read the full review
“Timely .... Splendid to read. It will fascinate anyone who is interested in Roosevelt, the New Deal, the 1930s, Congress, the presidency, the Great Depression, judges, the Supreme Court, or Constitutional law."
Judge Richard Posner, The New Republic
Read the full review